A downloadable game for Windows

Is there anything that isn't in this game? - several Twitter users 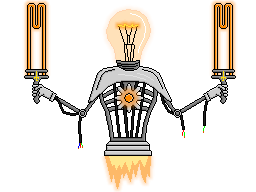 Sm4R is a crazy singleplayer 2D sidescroller RPG where you hunt monsters, complete quests, party up with other (bot)players and play minigames. By doing that you collect experience points and level up to increase your stats and skills. Find rare items and upgrade them to the max to become #1 of all players in your personal offline Sm4R world! Sm4R is a satire of typical MMORPG grinders. You'll be involved in varied and weird stories that may or may not remind you of your personal MMO experience.

This demo version is limited to level 30. However there is a way to increase the limit to level 50 which talented players who like challenges will find out.

The fastest Closed Beta tester reached level 30 after 5:47 hours. And there is even more to explore in the demo after that. Have fun!

The full version will be availlable in late 2019

If the game crashes after the EULA screen, try to set compatibilityMode=1 in the settings.ini or make sure VC++ redist 2013 is installed on your PC. (I think this problem only appears on a few Windows XP/Vista/7 machines where that software is not installed by default). And report any bugs you find! I'll fix them for the next patch.

For a game that aims to mimic a MMO. It does exactly that. The wide range of systems this game has is definitely intimidating to a new player, but to me, that is exactly how a traditional MMO has always felt. Despite that, the game does hold your hand through these systems IF you wish it to and at your own pace. The use of the in-game chat was a brilliant way of introducing a new player (a comical performance is also included).

I wish there was easier access to areas at the start though. As a level 1, I would run off to explore the world before things quickly turn dangerous and suffer many deaths. Requiring me to grind out more levels before moving on. The world is also full of secrets that have been really fun to figure out and it just keeps surprising me. Despite wishing some things were more obvious, such as portals.  Though once you figure it out it all becomes natural.

Sm4R's demo so far has involved me playing multiple play sessions. You can't see it all within a few hours and there's plenty of content in here that puts some console games to shame. Keep up the amazing work!

This game is a gem! It definitely surpassed my expectations by far, and I had very high expectations :) The chat system, various minigames, behaviour of other players; all so detailed and fun, indicating the developer's love for their game. If you like MMORPGs, try it out and witness how it really feels like an online game.

At first, although an accurate simulation of an MMORPG trait, the game might seem a little grindy (which might also be a good thing for some players). Nevertheless, it does ramp up fast as you gain more levels and be able to do more activities. Sm4R really shines when you explore the world. It has a lot of content, although it is only a demo. Try it, you will be addicted!

Reply
Another Gamedev Studio3 years ago(+4)

Loved it while under developing, loved it now. It;s like a MMORPG, but singleplayer.

Sm4R is a extremely creative game that introduces some really novel concepts. I've followed the development of this game from the beginning and it's really come a long way. The developer has a great sense of humor and it really shows in the writing of the game. The dev has also been super receptive to criticism and suggestions to improve his game by testers which is very refreshing in a world of AAA game publishers. I have no problem recommending this game to anyone as I feel it has a little bit for everyone!

I followed this game since I heard about its development and am happy to finally be able to play. The demo already features tons of content to explore. The chat is a very unique feature that I have never seen before where I even found a lovely girlfriend called TastyGrilll. There are many fun interactions while killing monsters and leveling up that keep the gameplay entertaining. The devs are active in with the community and constantly improve the game over time.

While I played, I encountered some bugs in this demo version, which I'm positive will be fixed in the future.

All in all, I highly recommend this game to anyone familiar with the gaming scene and especially the MMO scene.

I played Sm4R on Ubuntu via wine without any issues during the beta phase.

The game ingeniously combines tons of RPG and hack'n'slash elements with a very dynamic world that feels more MMORPG-ish than actual MMORPGs. The humor is on point and the bots are hilarious. They won't hesitate to call you a noob and laugh directly in your face when you mess up.

You can gear your character in many different ways with the insanely rich selection of items and the shiny auras and mounts you get will make you feel epic... till you get one-hit by entering the wrong area.

Explore for riddles, battle bosses, survive in an arena - but don't be afraid to die, because you actually get a visit from the Grim Reaper which is my favorite visual effect in my game. Speaking of which, the art style is as unique as it can get and matches the grotesque setting perfectly. :)

I really love all the interactions with the NPC's from the chat. Laughed my ass of at some jokes lul.

There are minigames in Sm4R with more depth than most games

I love it! Being one of the beta testers I've already seen "a lot" of the game - about 10% I assume ;). There are so many things to explore. Sometimes you have to be really smart to solve some riddles but you can also play it casually for fun. Worth a try!

This thing is SUPER addicting, you should put a warning on it :)!
Throughly enjoyed playing it to max level and can't wait to see more content!